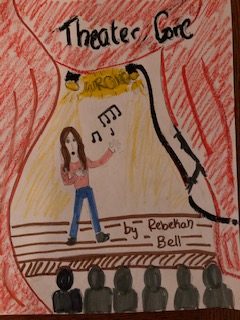 This is the adventure of my life, and I’m about to tell it to you. It all started one crisp, bright fall morning, when I was in 6h grade…

“Ashley Ann Davis!! Get uuuuuuppp!” My eyes open groggily. Everything is blurry for a second and then I see my mother standing over me with a frown that is just absolutely menacing. She is very punctual, so time is really a big deal.
“Come eat your breakfast!! It’s getting cold! And aren’t tryouts today!? The early bird gets the worm you know,” she nagged.

I jumped out of bed, threw on some clothes, and ate my breakfast. Then I caught the bus right on time, and headed to school.

My name is Ashley. I am 12 years old and I am in 6th grade at Fairview Junior High. I just joined the theater program. But everyone says that every decade, at Fairview, something bad always happens to the theater program. I don’t really believe that, it’s nonsense! You’ve got to be made to believe that stuff! This year, with Madame Trufant, we are doing Wicked! I’m so excited! I want Elphaba’s part SO much!! Tryouts are today!

A day later, the list goes up. I try to find my name through the bunch of other people squeezing in to look. I didn’t get Elphaba. But I did get Nessa, Elphaba’s disabled sister. I can live with that.

The next week after, when I walk into rehearsal, I find Mrs. Trufant looking down. One of the spotlight’s bulbs had cracked into a million tiny pieces. Spotlight bulbs are expensive!

The next month, one of the stage boards had broken. I was starting to think that maybe this curst was real! But then I realized that using common sense (like normal people, Ashley!) there was no such thing as magic or curses. I came to the conclusion that someone was sabotaging the theater program! But who?

I thought of all the possible suspects. I thought of Julia, the snottiest girl at Fairview, who tried out for the musical, but didn’t get the lead. She might be jealous! But then I realized that she just became class president, so she was really busy and happy. Then I thought of Jaren, my step-brother, who was in 8th grade. He was always calling us losers, and saying that our show was awful. I would have to ask him.

The next morning, the theater in the gym was on fire!!! We would have to set up a stage OUTSIDE. In the COLD. Brrrrr! I realized that Jaren had left to go hang out with friends last night. He could have done all this!!! I confronted him at lunch.
“Did you sabotage our stage last night?” I said angrily. “Maybe I did. Maybe I didn’t.” He said snottily. “So you DID do it?!” I shouted. “Nah I was just messing around! I wouldn’t do that Ash!” he said sincerely.

I decided that there was only one thing left to do. Try to catch the saboteur in the flesh. The next night I snuck out of my house and closed the door very quietly. As I crept quietly through the empty school halls, I felt a chilling sensation. As I peeked inside the gym door, I saw the saboteur. That’s when I was knocked unconscious.

I woke to sounds of beeping and ticking. I slowed opened my eyes. I was in what looked like a  hospital. I saw my mother sobbing in a chair next to me.
“Mom,” I croaked.
“Oh thank heavens! Sweetie are you feeling okay?” cried my mother, filled with joy.
“I went to the school gym, Mom, to find the saboteur. Did they catch him?” I wondered.
“Oh sweetie, they were very close. I’m just so happy that you are safe and awake.” Said my mother.

Two days later, I was led out of the hospital. My parents had put up a big sign for me when I got home. “Welcome Home Ashley!!!” it said in giant gold letters.

Eventually, two days later, I decided it was time to really uncover the saboteur. So I attached a small pillow to the back of my head that I had sewn when I was 5. It would protect my head. I grabbed a flashlight and head lamp as well. I was ready.

Again I crept through the silent halls of the school. I felt that eerie sensation again. I stepped closer to the gym’s solid metal doors, and peeked through the cracked opening between the doors. I saw spray paint all over the gym. Now where was the saboteur? I opened the door just a little bit, and it creaked softly. I just hoped and prayed that the thief hadn’t heard that. I stepped in carefully, watching my surroundings.

Then I was met face to face with a masked figure. It had emerald green eyes, and long ebony hair. It was wearing a peony perfume, expensive and exotic, I could tell. I was too frozen to speak. Luckily the figure spoke first.
“I’ve been expecting you my dear. I would knew you would come,” said the figure in a chilling voice. Something about this person was strangely familiar. Her accent. It sounded French. I only knew one person with emerald green eyes and long ebony hair, and who had a French accent.

The masked saboteur was Madame Trufant. It had to be! But she was my favorite teacher. And friend.
“Why are you doing this Madame Trufant? It just doesn’t make sense!” I said.
“Doing what? I’m getting rid of this horrid theater program of course!” she cried.
“You don’t have to do this!” I shouted. “You love this program, Madame! Every time you walk into the auditorium, I can always see the sparkle in your eyes. And now it’s gone.”
She pondered for a moment.
“Oh, Ashley, I don’t know what came over me! You’re right! I love this theater with all my heart! I must have been acting strangely since there is so much stress on the show in two weeks’ time.”
Madame’s eyes filled with tears.
“My dear, what have I done?” she cried. “I can never show my face again! How will the show go on?”
“Madame, could I make a suggestion?” I asked.
“But of course, my dear!” she exclaimed.
“If you rebuild the stage, and repaint the scenery, the show could prevail.”
“Oh Ashley, you’re a genius!” she exclaimed with new found joy.

And so they rebuilt the stage and repainted, and the show went perfectly.